After a recent update, the Zoom h2.n recorder can now record ambisonic files. I had one of these units some time ago, but got rid of it as I felt it’s mics were a tad noisy, but for field recordings that’s less of an issue (well for sources at a reasonable level, anyway) I have just bought another unit and have started experimenting with recordings and processing them in Reaper. After a bit of jiggery-pokery with formats,  I’m getting some interesting results. I think this may be interesting in conjunction with some binaural recordings. I intend to incorporate some things ambisonic in my upcoming albums.

The Zoom isn’t brilliant quality by any means, but it does allow me to experiment with Ambisonics, without breaking the bank having to buy a Soundfield (or similiar) mic. Also, there’s a lot of freeware ambisonic tools now available. It looks like the Youtube 360 VR thing, has finally brought ambisonics to the masses !

Anyway, here’s a montage of ambisonic recordings I made of a stream, converted to binaural (best for headphone listening)

Here’s an image of the woods on the way to the stream that I recorded.

Here’s an image of the Zoom (out in the field !) with the Zoom WSU-1 windshield on:

Field Recordings (a return to)

Field Recordings (a return to)

(This post is somewhat out of date regarding the recordings I’m currently making, I shall update this Blog with a new version soonest)

(Please note, the non-technically minded followers of this blog, may find this post to be a tad dull…)

I was once a keen field recorder, my trusty Sony MZ-R35 mini-disc recorder (in a very fetching blue)

and a pair of home-made binaural mics made from  a pair of Panasonic WM-61 capsules was considered to be a half decent set-up many moons ago. I used this combination to make a lot of recordings and have used them throughout the years, incorporating some of them on my albums (‘Orcus’ in particular) and for creating sound art installation soundtracks. For me, binaural recordings capture a spatial ‘realism’ (unsurpassed with other recording techniques).

I’ve now returned to making recordings, since my canine companion Maxa is sadly with us no more, I haven’t had the motivation to return to my music projects. I still feel the need to do something, so I decided this was better than (creating) nothing. 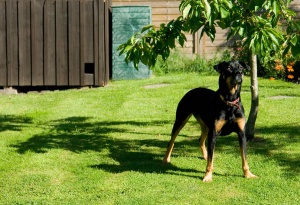 Doing some research, I found that there was an omni-directional microphone capsule with very good low noise specifications now available and it has been used pretty extensively by nature record-ists and the like. It’s called the Primo EM172 (I ordered some in UK from FEL Communication, who are very good – http://micbooster.com/). I bought a couple of matched capsules and made a binaural set-up from them. This works very well – much better than my old ones, much quieter and better low frequency extension. They are a tad ‘heath Robinson’ in their construction, but they work fine. The set-up I made allows the capsules to sit in the ear canal (just resting, not full insertion), I think this helps with the spatial effect, as it is closer to how the ‘inner ear’ picks up sound as modified by the pinnae (the outer ear). I used some flexible but decent quality cable from an old pair of Sennheiser HD580s and some silicone / heat shrink tubing to secure the cabling to the capsules. One of the advantages of binaural recording, is that it’s discreet – people just presume that you’re listening to music, so you don’t get the attention that you might do with lots of prominent gear. This ‘stealth mode’ yields interesting results when moving around whilst recording.

The cost of this set was £30 (approx), which is pretty darn good, considering the results. 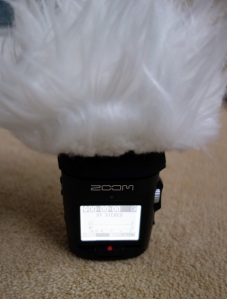 The MZ-R35 still works, but transferring the recordings to the computer via it’s line-out jack and the whirring noises it made in operation convinced me to ‘archive it’. The Zoom isn’t exactly a ‘pro-audio’ device, it’s internal mics are fairly noisy, with not a great lower frequency response, but it works very well with the high sensitivity Primo mics. It actually does some nifty surround type recording itself a combination of Middle and Side and X/Y pattern mic configurations and it can record these simultaneously as two stereo files. I’ve found processing these files independently to be interesting.The Zoom is small, light and it stands upright. It has pretty bad handling noise, but if stood up / tripod mounted thats not a problem and with external mics its not an issue either, as it’s the plastic body that picks up the noises.

As well as the binaural set I’ve made, I’ve also made the following (also with the Primo capsules):

A pair of Stereo mics – to experiment with different mic configurations – spaced pair etc. (components bought from FEL, assembled by myself)

A Mono mic – for intended use in combination with the Middle and Side mics on the Zoom, I’ve found some interesting spatial ‘position-ings’, particularly with music. (bought pre-assembled from FEL) 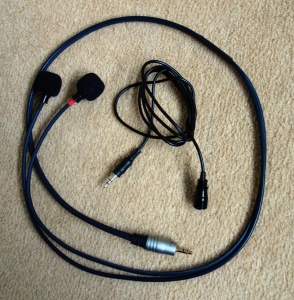 Windshields for these types of mics are generally made from a faux fur type of material and are pretty expensive for what they are. Necessity being the mother of invention and all that, I decided to make my own. I found the very thing – a rug made from long haired fake fur for £10, which I bought locally. I cut this up and made a windshield for the Zoom’s internal mics and a rather cunning re-use of some ‘Earbags‘ I bought last winter (for keeping ears warm, away from cold wind), I was able to make some windshields for the binaural mics. These are very difficult to come across, so making them myself was my only option. Contradicting my earlier point on discretion, I would look a ‘proper charlie’ with these things on, so perhaps not for public recordings (this may be less of a fashion crime in winter, though).

The material isn’t ideal – it has some high frequency attenuation, but it’s not that significant and some gentle Eq boosts can compensate for this at the editing stage of things. This is certainly preferable to the completely ruined recordings that anything more than gentle wind blowing (or movement) will create (particularly with binaural recording).

I’ve made a number of windshields for the Zoom and the external mics too (and a larger one), sewing and copydex galore ! I should say that the juries out on these at the moment though, as the Zoom foam windshields that came with my IQ7 mics seem to work as well – if not better. 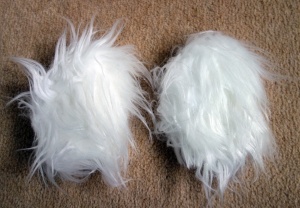 So, I’m now making better recordings (technically) that i ever did with this new set-up and I plan to make many more. I’ve put some recordings which I probably won’t use in my music, up on my Freesound page: http://www.freesound.org/people/Iggyf/
I’ve used other people’s recordings myself from there, so I thought it would be good karma to ‘give something back’ (so to speak).

I have also posted a few montages of these some of my recent recordings up on my Soundcloud page:

I’ve recently acquired a Sony PCM-M10, which is a better recorder than the Zoom in many ways, so I hope to get some improved recordings.