Consists of a small rectangular room with a large window, which was a child’s bedroom from the previous owners of the house, hence the Blue Elephant pattern wall paper !
The view is important to me, I’ve arranged my desk to be able see out of the window whilst I’m at the desk, which lets in a lot of light. The view is north facing and I love watching the clouds (usually) coming from the west. I haven’t named it or anything like that, it’s simply the place where I spend the majority of my waking hours.
The studio is based around two computers and that’s pretty much it, there’s no outboard gear apart from my Zoom G2.1u guitar effects unit. I create all my music on headphones, so the acoustics aren’t a concern to me. I have a pair of Kef Q3.5s, which I use for checking / final listening, but they aren’t used otherwise. 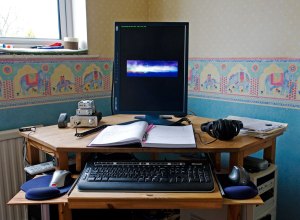 This is the desk where it all goes on. It’s a very simple setup – two computers, one monitor, one keyboard and a mouse. I use a KVM switch to switch between them. I dislike clutter and overt complexity, so this suits me at present.

If finances allowed, I’d get some sound-proofing done. My ears seem to be getting increasingly sensitive over the years – must be all this damned ambient music ! I’d like a ‘real’ studio very much, but I have to make do with what I have and I’m very thankful to have it, as it is.
For me, having time is more important than loads of gear. I try to keep things simple and familiarise and use the things that I have. I like to keep things maintained and I like things to work.

I currently (only) have three guitars:

A Tokai Love Rock (Les Paul copy), a Yamaha Pacifica 112 and a Cuenca Model 40 classical guitar. I’ve had lots of guitars in the past, but sold them on to get different ones, being left handed limits things regarding choice of guitars – which probably isn’t a bad thing. The Yamaha is probably the one I’ve had for the longest time (it’s now 17 years old). I can’t justify having loads of instruments that I don’t play, so I’m focusing on the ones I do play.
I decided the Tokai and the Yamaha needed some work doing on them (I’d upgraded the Cuenca last year) for use in upcoming possible projects. This turned out to be a bigger task than I anticipated, but I’m finished now (I think !).
The Tokai is (from memory) the only guitar that I bought new, I got it from Music Ground in Leeds in 2004. It’s a Korean model and even though it was a relatively inexpensive instrument to buy, it’s probably one of the best guitars I’ve owned.
Pretty much everything has been replaced on it, as follows:

Pickups now Seymour Duncans ’59s
Gibson TP-6 Tailpiece and roller bridge
Schaller Machine heads
Electronics – ‘custom rewired’ (treble bleed circuit on / off and tone control bypass) – with push / push minipots and screened properly (lots of copper tape). The treble bleed capacitor when switched in or out makes a big difference to the sound of the pickups when they are turned down.
Various – Graphite nut, new knobs, metal jack plate etc. 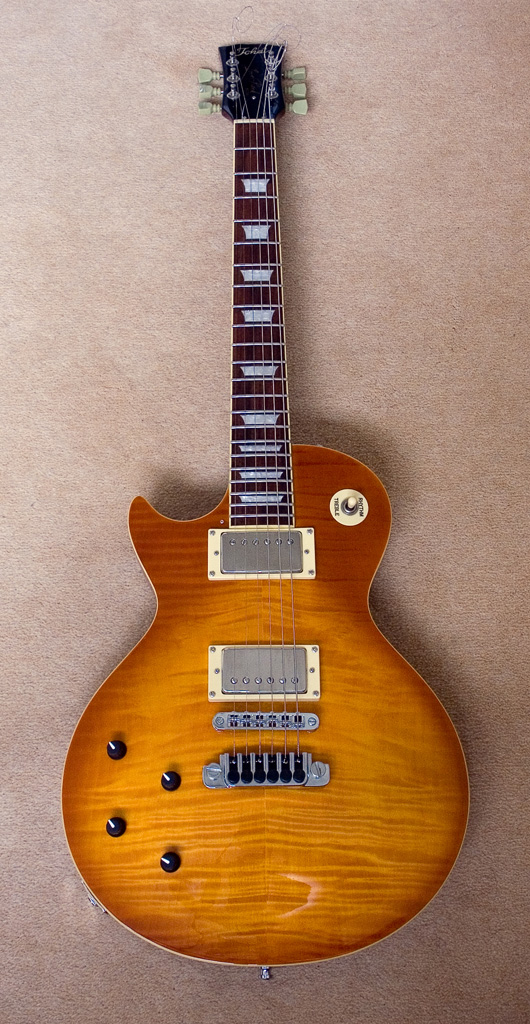 The Yamaha 112 has also been extensively modded. A Seymour Duncan JB bridge pickup and Fender silver lace sensors replaced the stock pickups. The body has now been sanded to remove the finish (had been sprayed metallic green at one point!), added locking machine heads and various bits and pieces. It is a very resonant guitar and I think this is probably due to the shielding of the pickup, gluing the neck and stripping the body down to the bare wood). Lastly, I scalloped the fingerboard above the 12th fret, to aid string bending – it didn’t !

The Yamaha is a no-thrills workhouse of a guitar and is very versatile, I’ve played it extensively. The lace sensors in particular give a great variety of tones. I call it the ‘Pete-caster’.

I’ve had this guitar for 27 years now, my mother bought it for me for my 21st birthday. It was upgraded in 2011 to include a Schatten HFN-C pickup http://schattendesign.com/HFN-CS-Artist.htm and Rubner machine heads were added (both of which are recommended). It’s a very nice sounding guitar, which I think is in no small part to the fact that it’s been played a lot over the years. 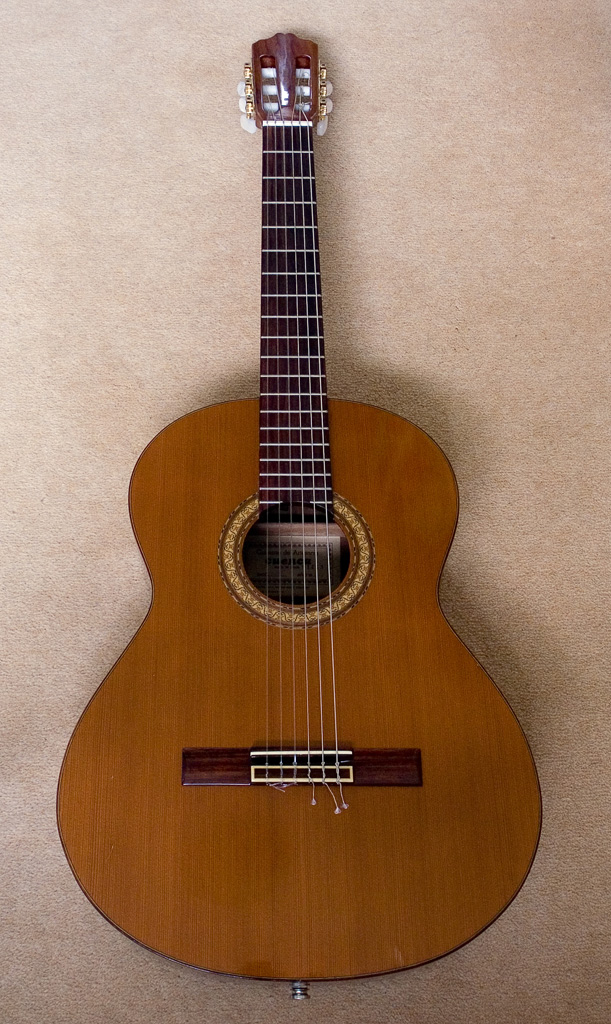